Sun May Find started in the fall of 1995 in Boulder, Colorado, after Chris Williams (guitar and vocals) arrived from New Jersey to start graduate school. He met Mark Wyman (guitar and vocals) and Scott Bransford (drums) by posting a flyer in Wax Trax Records advertising influences like Rodan, Slint, Gastr Del Sol, My Bloody Valentine, and the Jesus Lizard. Our first several rehearsals took place in an empty meeting hall near Scott’s dorm room on the University of Colorado campus. We quickly moved from jamming to song writing, and our earliest tracks, “Shattered Stars” and “Port of Call,” began to take shape there.

The project began to resemble a real band in early 1996, when Mark and Scott found a practice space that was much better suited to our noisy rehearsals. On the northern outskirts of Boulder, not far from an abandoned drive-in theater, there was a field full of empty, decaying 18-wheel truck trailers, many labeled IDEAL TRUCKING. Most were rented as storage containers, but the owners also allowed bands to rent them as practice spaces. Amps were powered by running long extension chords from a precarious-looking power pole in the middle of the dusty expanse. Mark and Scott signed the lease, and from then on, our musical home was a long, narrow sheet metal box with no heat or air conditioning. 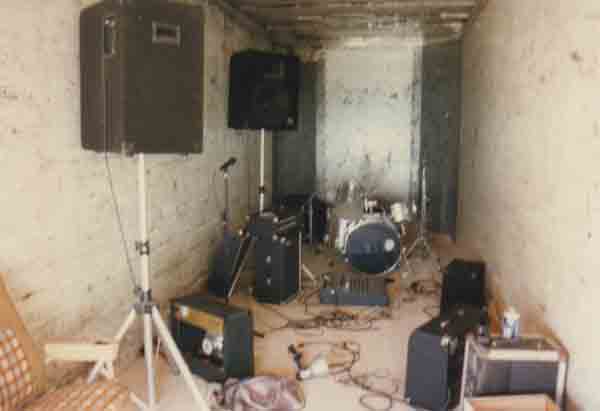 We had no money to invest in sound proofing, and so when we played, frequencies ricocheted around us in ways that became critical to the development of the band’s sound. Most of the time we played with the door closed, but if we played with it open, the trailer became a sound cannon trained on the expensive houses topping the nearby Rocky Mountain foothills. We didn’t see too much of the other tenants on the lot, but became friendly with a 40-something blues player named Beer Can Bob who practiced a few rows over. 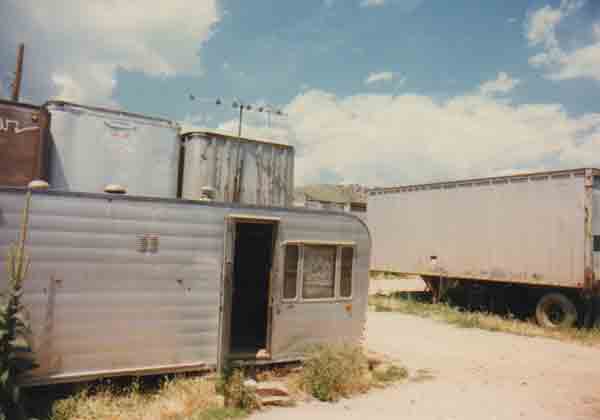 Occasionally we also talked with the superintendent, an aging Boulder hippie who always seemed to be wearing a T-Shirt that said DON’T DRINK THE KOOL-AID. He lived in a rusty trailer just outside our practice space with a small, long-haired dog and a sickly cat. Often he would come around to sheepishly ask for the back rent we owed on our space, but he always said he liked our music and never seemed too intent on collecting.

Not long after settling into Ideal Trucking, Joe Costa began playing bass. One of his early contributions to the project was giving it a name, which he found in a fragment of a poem by Emily Dickinson. The songwriting direction the band took resulted from a tension between Mark’s affinity for slowcore bands like Codeine, Low, and Labradford, Joe’s taste for British bands like Ride and Spiritualized, Chris’s East Coast post-hardcore roots, and Scott’s alignment with a regional scene that included the likes of Christie Front Drive and Boy’s Life.


Through the freezing nights of the Colorado winter we jammed in multiple layers of clothing, huddling around a space heater to our warm numb hands. Then summer came and the box became an oven. Resting near the door between sessions, watching the snowfall or thunderstorms move in off the mountains, we often had heated debates over the course of the project. It was as if we’d found the perfect crucible for our conflicting visions of music: a place where extremes of heat and cold, and vistas of pastoral scenery and industrial waste pushed us to create something ambitious, however flawed and fraught with tension. 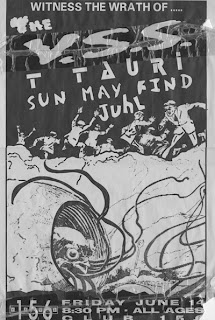 We probably played around a dozen shows during our time together, primarily in Boulder but also at least once in Denver.  Our sound was a poor fit for the local scene, which was divided between jam bands like Acoustic Hookah, pop punk acts like Pinhead Circus and the Fairlanes, and the darker, more aggressive sounds put out by Sonny Kay’s influential GSL label, which began in Boulder and later relocated to California.


Because there weren’t many venues in Boulder, we often ended up on bills with punk and hardcore acts. A few of the shows were in coffee shops, and we played at least one gig at Club 156, a small bar in the University of Colorado’s student union, and at several house shows. After Scott moved out of the dorms, he lived at a punk house on Colorado Avenue that hosted Men’s Recovery Project, Hot Water Music, and Blink 182 among others.

On one memorable night, we played Scott’s living room with The Locust and Jenny Piccolo, two Southern California "powerviolence" bands.  In terms of songcraft, they represented Sun May Find’s exact opposite. The average Sun May Find song lasted around six or seven minutes, but they played tight, ballistic, almost comical bursts of noise that often clocked in under thirty seconds. The climax of the Locust set may have been when they filled the living room with smoke by setting off a sheet of firecrackers in the kick drum.

Despite the stylistic differences on display that night, our louder counterparts were quite encouraging, especially Jimmy LaValle of The Locust, who later started like-minded projects including Tristeza and The Album Leaf. Scott’s flyer for the show, which was made by altering an image of a Locust from an antique encyclopedia from the CU library, later became the stuff of legend. A designer at GSL Records appropriated the image, hardly even changing the size, for an early 7” by The Locust, and for years, the band would sell the emblem in the form of t-shirts, belt buckles, banners, and backpacks. To this day, some die-hard fans use it as a blueprint for their tattoos. (It even showed up on the Jerry Springer Show when The Locust bassist Justin Pearson appeared in an episode called Secrets Come Out.) 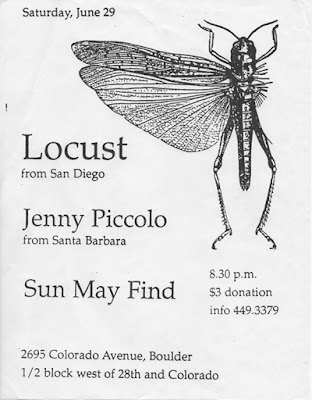 After a failed attempt to organize a tour, and with three of the four members contemplating moves to other towns, Sun May Find broke up at the end of the summer of 1996.  Our final pair of shows took place sometime in August, when Beer Can Bob invited us to play an afternoon concert way out on the plains east of town, in a parking lot behind a motorcycle repair shop.  Unsatisfied by our performance there, we played one last gig later that night in Scott’s living room, attended by another band from the festival and the dozen or so people from town who hadn’t written us off as too slow, too quiet, unpunk, or not granola enough.


The songs presented here are the results of two recording sessions, one in the spring of 1996 and a second that summer. In both cases, the basic tracks were recorded live in the trailer using Mark’s 8-track cassette recorder, and we would lay the vocals and overdubs at Joe’s house in the subsequent weeks. We released the first four songs as a demo that we also sold at shows, but by the time the second set of tracks was finished there wasn’t a reason to do much more than save them for our own memories.

Listening back now, the loud/quiet/verse/chorus/outro song structures, especially on our first recordings, sound slightly formulaic. But by the time we recorded the second set of songs, we had developed an approach to composition that felt more subtle, less reliant on foursquare repetition, and better able to construct long-form narrative arcs based on the interplay of the two guitars. In songs like “Where It Pours,” “Grounded,” and “The Patterns, The Stitches” patient listeners will be rewarded with moments where, years later, we realize we somehow managed to capture something beautiful and quite reflective of the intensity of that time in our lives.

Soon after the band’s breakup, we all left Colorado. Joe moved to Chicago to form L’Altra with Lindsay Anderson (also the model for the cover of the Sun May Find demo). Mark left for Seattle and later moved to New York, where he would play in Shoes and Rider. Chris also moved to the New York City area, and has played there with the Sick Passengers and the Glass Bees.