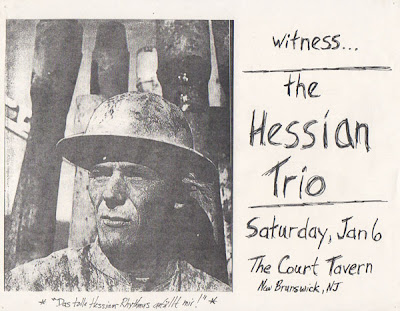 In the summer of 1995 Hessian recorded a couple of songs in rehearsal. We just used a boom box, there are mistakes in the playing, and time did not treat the cassette tape well, but you'll get the idea.
"A Construction Theme" was one of the first songs we wrote and must have been named by Ted. Today this one feels right at home in the early '90s coming for a bunch of guys who were listening to the Jesus Lizard and Shellac at the time.
"Your Name on a Grain of Rice" was the last song we finished and always felt like a step forward to me. I came up with the name when I was traveling in Paris. There was a man in front of Notre Dame who would ink your name in microscopic letters. At the time something about this struck me as moderately profound.
I'm still very proud of the dynamics among the instruments we were able to create in several sections of the song. The whole idea was to leave holes for one another, like the Ex at their most rhythmically interesting, Can in "Spoon," or Sly & the Family Stone in "Sing a Simple Song." Had we continued, this was the path forward.
I made the flyer above for a show in New Brunswick at the beginning of 1995. This was obviously before I got my hands on page layout software. Scroll down for lyrics.

A Construction Theme
Please leave your jacket in the cloakroom
And lay your shoes aside
And step inside for a while.
Warm your hands out by the fire
And here's a glass of cider.
We've set a place for you to
Lay your head, and step outside the outside.
You've spent all your quarters to hide out from your insides.
There are houses for the pious
And I know a place I'd buy us a round of drinks or two.
And on a page or in some corner
With the hand of some man's daughter
In the hay or on the town
We lose our heads and step outside the outside.
Fifteen minutes underground to hide out from our insides.
Your Name on a Grain of Rice
He wears 500 faces
He wears his patience like a crown
But when they pressed him it faded.
"It's just that I'm going 'round a bend again," he said,
"Another bend in 15 years of my time.
I've left my histories in a straight line through tomorrow.
I tried to bury my name."
(He had his name written on a grain of rice.)
He's a clerk, he's a (), he's an engineer.
He's got the books to prove he knows a thing or two.
But what he sees he can see through.
Black eyes.
He wears 500 faces,
Masks to hide a patient frown.
He dons the mask of all he ever meant to be.
Hessian were:
Brian Goad (bass)
Ted Harrison (drums)
Chris Williams (guitar, vocals, lyrics)
Posted by Chris Williams at 8:48 PM